skip to main | skip to sidebar

the mouse that quibbles

Tightrope in the Air 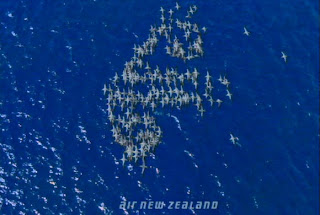 Tightrope in the Air


This is not a particularly new story. And it’s probably one that hasn’t gotten a lot of attention outside New Zealand, or the Southern Pacific region. But it is a story that has continued to grow, and is an interesting study of just how far Bush’s War has pushed other nations’ politicians into self-serving self-survival. It’s the story of a scandal that wasn’t, which then became a scandal anyway, mostly because it wasn’t one in the first place, but revealed an even bigger scandal underneath. The gist of it is this – while the vast majority of New Zealanders are adamantly opposed to the war in Iraq and view any military collaboration with the United States as intolerable, commercial carrier Air New Zealand (rather than the Royal New Zealand Air Force) has been flying Australian and US combat troops to staging areas for the Iraq war. And the New Zealand government has quite possibly been lying about how much they knew.

On August 15th, Prime Minister Helen Clark appeared on prime time television, livid with anger, demanding answers from Air New Zealand. She and her ministers were publicly outraged when Air New Zealand ferried 600 Australian combat troops to the Iraq border in Kuwait and United Arab Emirates last May, with US fighter-jet escort, openly using ordinary passenger aircraft bearing the distinctive blue and white Air New Zealand koru livery. These 600 Australian troops were then deployed to military duty in Iraq. On the 29th and 30th of July, Air New Zealand flight ANZ1921 transported US troops deploying for missions in Iraq on a secret flight between Darwin to Hiroshima. Hiroshima is not on Air New Zealand’s regular flight schedules, but it is rather conveniently next to the US Marine Base in Iwakuni.
The Prime Minister, Defence Minister Phil Goff and Foreign Minister Winston Peters have all declared they knew nothing of the flights until revelations were published in Investigate magazine. But 78% of the airline is government-owned, and Air New Zealand decisions on this level aren’t taken without consultation with their major shareholders, the government. Foreign Affairs secretary Simon Murdoch, head of the Ministry of Foreign Affairs and Trade (MFaT) was told in advance of Air New Zealand’s plans and asked for advice on the matter, something Air New Zealand officials were able to prove, rather quickly, by producing official documents from the ministry okaying the proposed charter. While Simon Murdoch, it seems, ‘forgot’ to inform the rest of his government of these charter flights, the General Manager of Air New Zealand operations and planning, Glen Sowry, was able to confirm all the proper enquiries with government officials had been made long before the charter was committed to. The company never made any secret of these flights, which had been ‘widely publicised within the company’ and well-known in the international aviation marketplace.

And I know this is true, as The Boss showed me the July issue of Crews News, the Magazine for Air New Zealand’s Air Crew (which - completely unrelated to this post - was amazing for the number of cosmetic teeth whitening ads, ads for dermabrasion and this gem: ‘Irritating Passengers? Express yourself on the inside with Botox’ – I kid you not. Also darkly amusing was the checklist of ‘Top Ten Things Not To Say When Applying for Your New US Crew Visa’, which included, ‘Are you all that fat?’ Charming). Right there on page ten is an article, ‘A Journey to Kuwait’, by Wayne Mitcham, reporting ‘on a unique journey that took him to Darwin and Kuwait’, complete with bubbly details on shopping and photographs of happy smiling flight attendants dressed in black chadors standing next to a white robed Kuwaiti official. If this was an official state secret, it was a pretty poorly kept one.

Moreover, while the Prime Minister might have been publicly chewing the carpet, it seems she may have been aware of these foreign troop transports all along, despite her Foreign Affairs secretary's convenient amnesia – only weeks before the first flight of troops into Kuwait and US troops into Japan, Helen Clark met with US Defense Secretary Robert Gates, and it is unlikely they were merely discussing the menu and table decorations for the next state visit.

At the beginning of the Iraq war, Prime Minister Helen Clark deployed two frigates and a troop of sixty army engineers to Iraq for ‘peacekeeping’ exercises with the British troops in Basra. Yet Paul Wolfowitz considered the New Zealand’s military support as ‘contributing forces’ to the post-invasion occupation of Iraq, and in return made New Zealand one of the countries eligible for commercial contracts in the United States. But after it became all too rapidly obvious that Iraq was turning into a disaster, Clark’s Labour government withdrew the army engineer unit and has increasingly endeavoured to dissociate itself from the war, and the Bush administration.
Or… at least, as far as the New Zealand public was concerned. Privately, it seems the government has been less than inflexible on its anti-war position. So these clandestine and not-so-clandestine flights of combat troops into the Middle East has not gone down well with the Kiwi public.

Nor with the Australians. The Australian government expressed its ‘extreme displeasure’ with the Clark government’s hypocritical anti-war posturing, Foreign Minister Alexander Downer called in New Zealand Ambassador John Larkindale for an official reprimand. Australia has now forbidden its military to use Air New Zealand under any circumstances, including commercial flight travel. Helen Clark’s response was to declare that Downer should keep his nose out of New Zealand’s political affairs.

On August 17th, Helen Clark – rather than shifting her righteous annoyance onto an apparently incompetent member of her government – decided to try and shrug off the Air New Zealand fiasco instead, declaring Simon Murdoch had simply had a ‘bad-hair’ day. Yeah, right.
The very next day – and three days after Clark’s denunciation of the airline – Air New Zealand flew fifty-five Tongan soldiers enroute to Baghdad where the Tongans are to provide security at the US base Camp Victory.
Air New Zealand has had a rough past decade, six years ago barely surviving a loss of 1.4 million dollars (NZ) when its subsidiary Ansett Australia bit the dust, and the government stepped in to rescue the beleaguered airline. Stripped to the bones, Air New Zealand has cut every corner possible – work diverted from unionised staff to outside contractors, mass redundancies, inflight meals more suitable for workhouse inmates than commercial air passengers, flights made with just enough aviation fuel for the scheduled trip and not a drop more to lighten air weight, and allegations of recruiting cheaply paid trainees who fail security checks or can’t speak English. And, of course, accepting any charter deals it can wrangle. Such practices have meant a demoralized air service, but it has also meant plenty of profits for its primary shareholders – the New Zealand government. Small wonder, then, when the Prime Minister has tried Bush type tactics, rewriting history and scapegoating blame, the airline has fought back.

It might seem this is just a Kiwi problem, but as long as the Bush administration can exert pressure on other nations to secretly ferry soldiers and contractors heading into Iraq, as long as commercial businesses like Air New Zealand are struggling for economic survival from a worsening global economy and compelled to make unpopular, if not unethical, business deals, the longer this war is going to last.
And that makes it everyone’s problem.
Posted by Nonny Mouse at 5:16 PM

I had no idea.

This is feckin' huge, Scoop have been Scoopped I guess!

Great piece Nonny. Thanks for putting this info out there.

Just a note: "publicly chewing the carpet" might be misinterpreted by US readers. Our most similar phrase is "rug munching" and it's almost never done in public.

I'm curious about the legal implications of using a commercial aircraft for what is essentially a military flight.
Does this violate international law or convention?
Doesn't this blur the line between civilian and military air traffic and make flying more dangerous for everyone?

Great post. However what this highlights, is the failing of politicians to stand up for what they believe.

Comprimising ones beliefs for the benefit of political survival seems all too common these days in politicians around the globe. What happened to idealism?

Newer Post Older Post Home
Subscribe to: Post Comments (Atom)
A 'umble little blog, sort of kinda mostly political with occasional posts about anything else that I'm thinking about at the time as well as a bit of personal whining thrown in for therapeutic value.