skip to main | skip to sidebar

the mouse that quibbles

The Lamentable Demise of the Republican Party 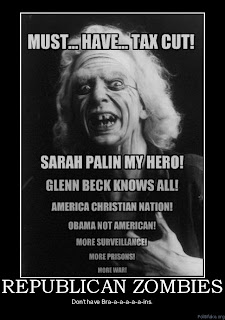 I enjoy reading The Onion, even more so when those it lampoons don't get the joke. But while satire is meant to be amusing, it quite often reflects a more serious state of affairs. A recent Onion post on a captive breeding programme designed to save the critically endangered moderate Republican had me laughing, before it had me thinking.

Because, actually... they’re right. The Republican Party truly is dying. For all intents and purposes, it’s already dead, the only impression of life being the lurching about of animated zombies eating their own brains, leaving the traditional mainstream moderate Republican conservative embarrassed and frustrated. The traditional mainstream moderate conservatives aren’t even in reality Republicans any longer, as the party itself has deteriorated from the rot of tea party fanaticism, and Koch Brother corruption, and the constant barrage Fox propaganda posing as journalism, and hate-filled blustering talk shows spewing hydrophobic nonsense, and the jaw-droppingly atrocious bunch of incompetent idiots posing as GOP Presidential candidates. All that is left of a once respectable political party is the name “Republican” for nostalgic conservatives to cling to.

Which is so not good for our country. If disaffected Republicans ever managed to purge themselves of the zombies and the tea partiers and the Limbaughs and Fox and regrouped as something else, much like New Labour rebranded itself in the UK (although New Labour turned out to be just Tory Lite rather than any sort of improved Labour party), Democrats might finally have genuine opponents again - which would be both a bit scary and a bit hopeful. A nation runs best when there's an honourable opposition to keep the ruling party honest, regardless of what party is in power. An honourable opposition represents a very large proportion of the nation’s citizenship, and gives that citizenship a strong voice. An honourable opposition works harder at designing and proposing alternative ideas in the hope that the good they can do will garner them enough votes next go-round at the polls. I’d like to see an honourable opposition again.

Right now, that just doesn't exist, and it's not good for either side. Right now, we have a Republican party usurped by loons and goons whose only goal is to bring down President Obama, regardless of the cost to the country, regardless of the damage. Oh, they have a few other ulterior motives, like imposing an authoritarian religious regime on the country that would give hardline Sharia law a run for its money, revoking decades of progressive advancement and what little civil liberties we’ve got left after the Bush administration was through. But repairing our badly damaged and crumbling roads, our airports, bridges, dams, levees, schools, hospitals, national parks, our electrical and water grids? Creating badly needed jobs and strengthening an economy teetering on the edge of collapse? No, that’s not even a blip on their radar, too busy preaching tax cuts for the rich and “austerity” and “sacrifice” for everyone else, like a fat man telling someone dying of starvation the way to get better is to eat even less. And as a result, we have a Democratic Party gradually starting to lose its way as well, rife with DINOs and Blue Dogs and the incompetent or lazy or co-opted. Without an honourable opposition, we have very little with which to keep our party honest. We need a strong, healthy, honourable Republican Party to stay strong, healthy and honourable ourselves.

The Republican Party was once a champion of civil rights, personal responsibility and a regulated government, and engendered people like Abraham Lincoln , Teddy Roosevelt and Dwight Eisenhower. Today, Mitt Romney’s father would not recognise the Republican Party his son would like to head, Ronald Reagan’s son says his father would be furious with what the Republican party has become - a party utterly dominated by the rich, the religious fanatic, the psychotic, and the jingoistic bigot. The last remnants of the decent, honourable Old Time Republican party are either senile or dead, what’s left is vitriolic, mean-spirited and downright stupid.

There is no Republican Party any longer. It has the name, but it long ago lost its mind before it lost its soul. And I, for one, truly do mourn its passing.

Hey Nonny, how's the weather in NZ? I visited New Zealand back in the 80's. I've got pictures to prove it. I enjoy reading your posts on C&L. I gotta say, I doubt that a loyal opposition is what keeps any party honest. Parties tend to follow the money, you know? Republicans are more dependant on corporations and wealthy individual donors, because less affluent conservatives are, well, kinda stingy. Democrats tend to rely more on small donors. Unless they are Clintons. I suspect that I might become an ex-pat myself soon. I'm leaning towards Italy. Yes, the politicians are crap, but the food and wine can't be beat!

Hey, there, Poppa Cap, thanks for stopping by. It's been a pretty crappy summer in New Zealand this year, frankly, cold and wet and windy just about everywhere. But it's still a great place to live, regardless.

An honourable opposition is only one of many things that help keep a party honest, but it's one of the things that if you DON'T have it, tends to degrade a government pretty damned fast. Italian politics will be interesting, and while I love the cuisine and food there, too, I still prefer France. That being said, NZ has some pretty great cuisine - check out the Hokitika Wild Food Festival, which is where I'll be in about a fortnight's time! :)

Troopers are known to hold powerful fire power by way of major machinery weapons. Their armor supplies the highest defense. Specializations in the Trooper class consist of Vanguard and Commando. Vanguards are currently the most ideal line of defence contained in the Republic service. Vanguards sport more advanced major armour. Commandos blow the battlefield with their large cannons and additionally overtake enemies by way of their intense firepower.
Buy LOL Elo Boost
Buy League of Legends Coaching

Newer Post Older Post Home
Subscribe to: Post Comments (Atom)
A 'umble little blog, sort of kinda mostly political with occasional posts about anything else that I'm thinking about at the time as well as a bit of personal whining thrown in for therapeutic value.